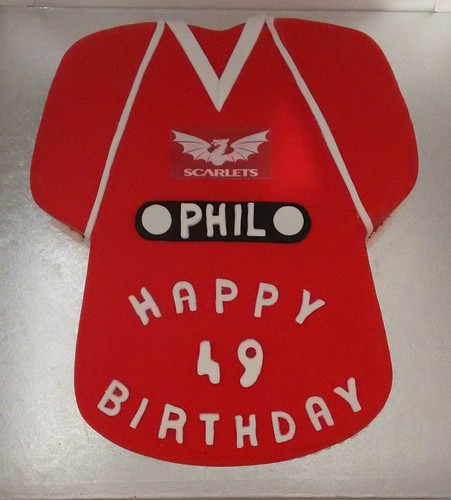 Have you ever made a cake that seriously pushed the boundaries of both your ability and patience? Well, this one is mine!

It was the second of two cakes made at the same time. This one was for my brother-in-law's birthday. My sister wanted a Scarlet's (Llanelli) rugby shirt and even hired the tin for me. It was way too expensive to buy for just one cake.

I already knew that the mini blocks of red fondant I had were not going to be enough to cover it, so I had to buy more from the same supermarket so the co!our was the same. First supermarket - sold out! I had to travel about 20 miles to get some. Bought three more packs. They're only 250g a pack.

Supermarket coloured icing is so mass produced and such poor quality that it simply would not cut the mustard, so-to-speak. This was also the opinion of a professional. I struggled, and ended up crying my heart out with frustrstion because it kept cracking even though I'd kneeded it to warm it up.

Failure! Dramatic failure. I had to strip the whole cake and bin eight 250g packs of red, ready to roll fondant.

Enter my saving grace! The cakey bakey shop :-)
2kg of professional grade red fondant later, oodles of advice, including "it might take two of you to get the icing on it" and voilà ...
A red rugby shirt. 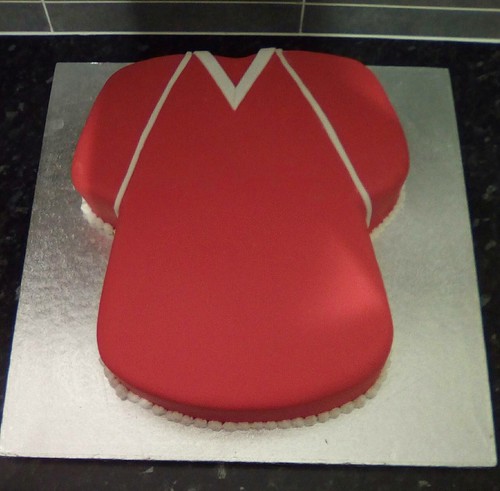 Trim it with a little shirt detail and pipe around the edges and it came out just fine. I wasn't going to ice the board because I thought it would detract from the pretty good work I'd done on the main piece.

Because this cake had seriously dented my self esteem and tried my patience to breaking point, I was not about to mess it all up by trying to, freehand, cut the rugby team's logo out of icing! Not a chance!

Cakey bakey shop saviour advised an ediible printed one. I agreed and paid to have one printed for me. Had to wait until the next morning to collect, which didn't turn out exactly as planned. But they don't look too bad

The cake itself also fried my brain. The biggest one i had ever made and a shape that wasn't round or square. I ended up baking three layers and having to discard one because it was so out of shape, it was useless.

So, inside it has two layers of yummy vanilla cake with vanilla butter cream, made with Trex, of course.

Biggest lessons today! Learn to say "No", if I can't, get all the help I can get and, don't buy supermarket fondant for big projects, unless it's white, because that seems to work ok
Posted by Niki Hill at 20:34 No comments: 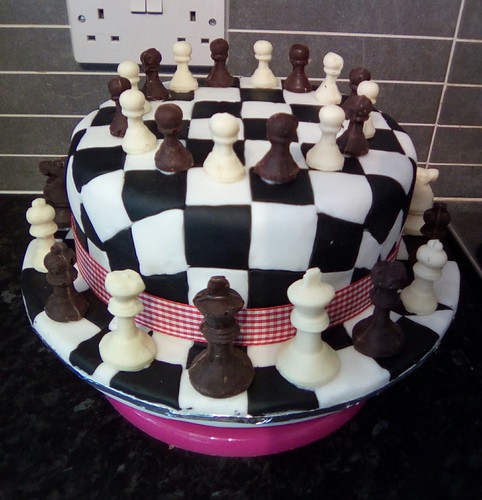 This chess inspired cake was made for my uncle's 65th birthday. He is positively chess crazy and even teaches primary school children how to play.

Anyway, I didn't want a chess board, but wanted a chess board effect on a round cake. Inside are two flavours of cake ... Chocolate and 'plain' these were cut in such a way that, when cut for eating, it should also look like a chess board. I'll add a picture to this post when it's cut. [See bottom of post to see if it's updated].

For a chocolate flavour sponge, buy a good quality baking cocoa and exchange about 12.5% of the flour for the cocoa

Again, a learning curve.  To decorate, I cut 2cm squares and stuck them onto the cake after a base layer of fondant had been put on it. 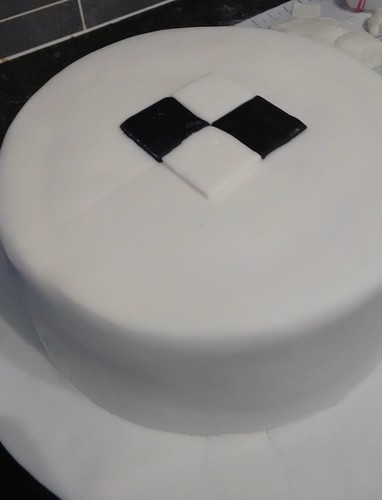 However!!!! Here's my learning bit!!!!
I lost my way with the squares, as you an see, so next time, I think I'm either going to stop at the edge of the round then start in a different direction on the sides.
OR
Cut out the squares and stick them to the rolled out base layer and then cover the cake as normal. Watch this space :-) 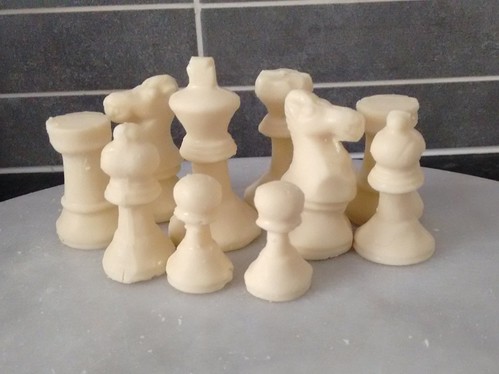 I also added home made chess pieces. I used dark chocolate and white chocolate. But that wasn't so easy either. They kept melting when I was trimming them off lol.
Lesson learned? Yes, put them in freezer, then trim. Instead of just putting them in the fridge.

But they look OK. 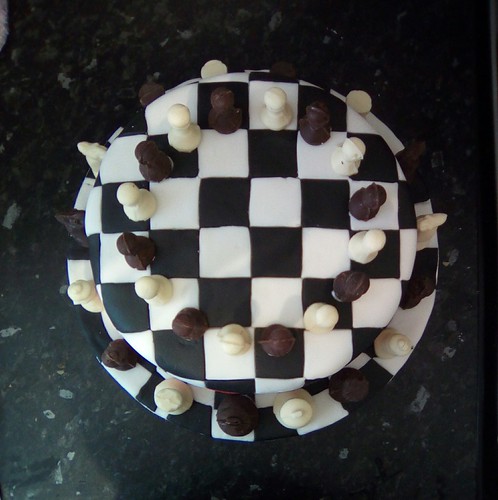 Once again, I've learned the hard way. But if my errors help you, and me in the future, I don't mind sharing. 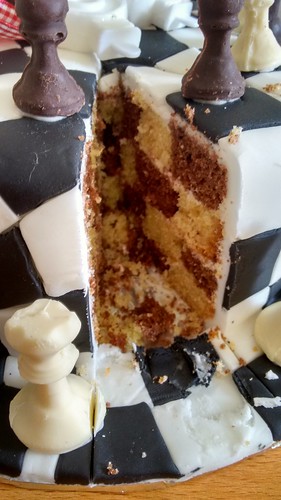 Update:
The inside of the cake worked out perfect
I'm a happy bunny :-)