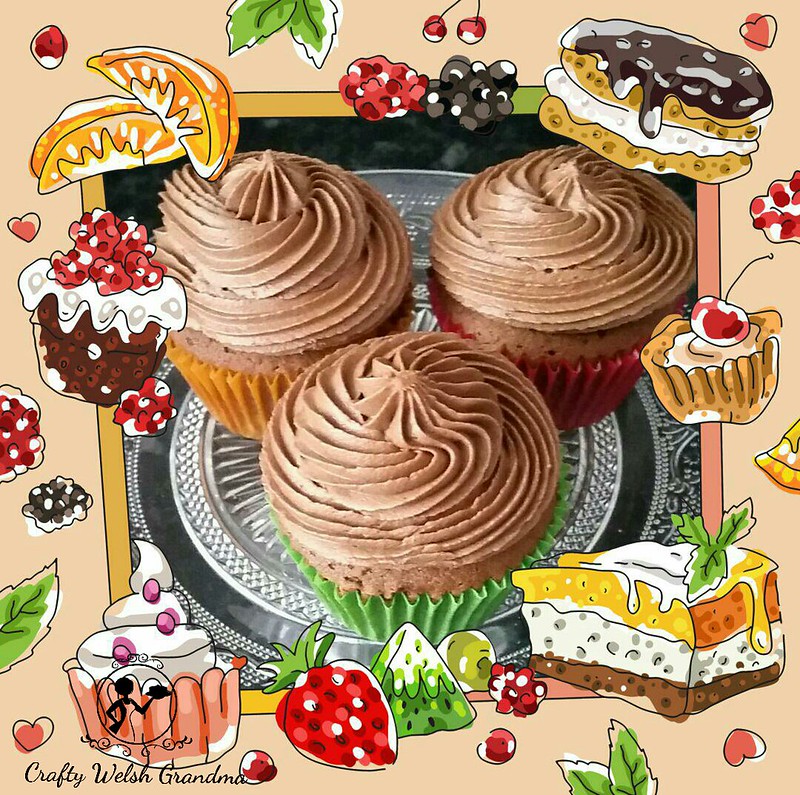 It seems everyone wants cupcakes these days! So, on a marathon baby-sitting expedition, the kids wanted to make these, for Mam and Dad.

My usual mix makes about 15, if you cut it by 25%, the mix will make a perfect 12, unless you add chocolate chips. To this mix I added cocoa powder, to make the sponges chocolatey. There's the recipe changes on the page. 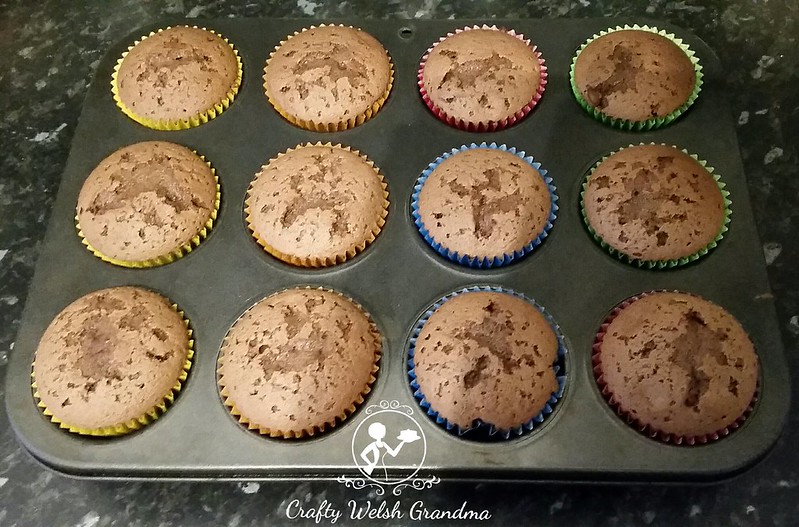 Now, I never weigh the chocolate chips, but I poured into the mix about 50g or half of the bag I had.

The kids made these themselves, I weighed out the ingredients, supervised and coached as they mixed the batter. It was a joint effort.

I cooked them for about 20 minutes.

The buttercream (1.5 x the mix) was another story, I mean, I make a heck of a mess when I'm using icing sugar, so the help was with the scooping and sifting. I did the mixing, and still made a mess. My black work surfaces always turn a delicate shade of grey when I make this.

They turned out very well, I made 16 in total, four for the kids and adults in the house and the remaining dozen will be going home with the kids. I know Mam and Dad will like them, they smelled delicious, but again, none for me. 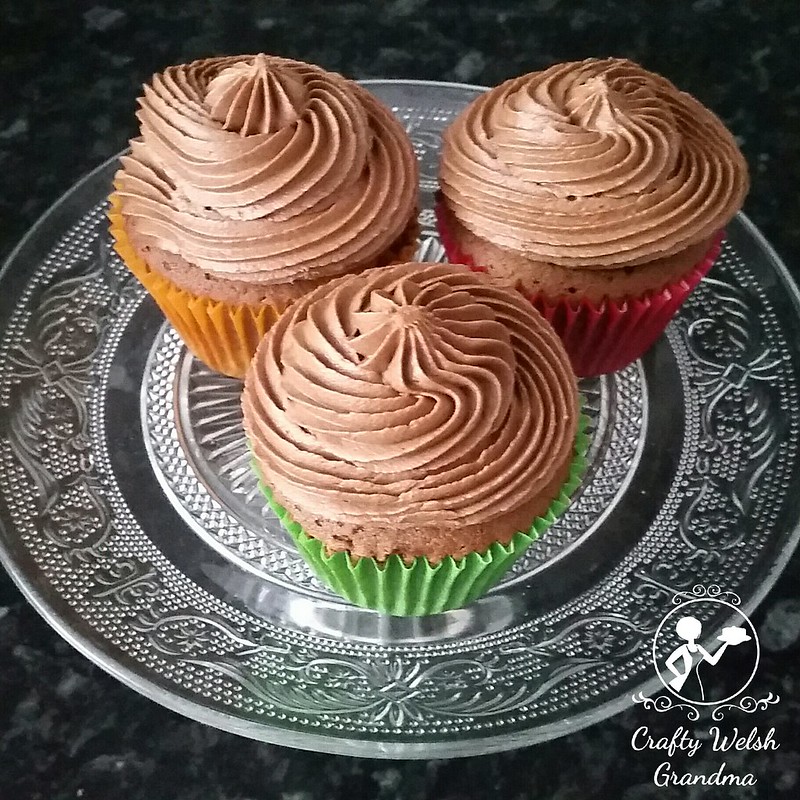 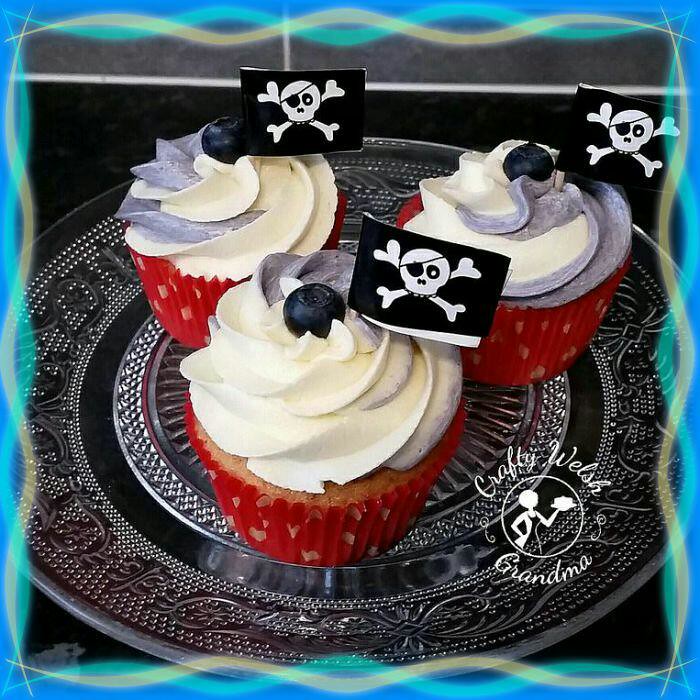 Once more I find myself saying ... "It's not everyday that my Grandson asks me for something ..." yet here I am again :)

I found myself at the school for a meeting on his progress, he has ADHD and ASD, so every progress update is important. Anyway, he was telling 'Sir' how "my Grandma makes the bestest cakes" and, in the same breath asked "Will you make me some cakes for the weekend Grandma?" I still can't say no to him, even though he's nine now.

It ended up not only being cupcakes, but blueberry cupcakes and pirate cupcakes too! So here they are.

I used my standard cake mix and added an additional 200g of fresh blueberries. I've never been a fan of cooked fruits, I prefer them raw, but I had to try. Once mixed in gently, I realised that I should have adjusted the mix to make allowances for the increase in volume that these blueberries were to add. I ended up making 24 medium sized cupcakes and I only needed 12.

The cooked for a few minutes more than usual but turned out ok. 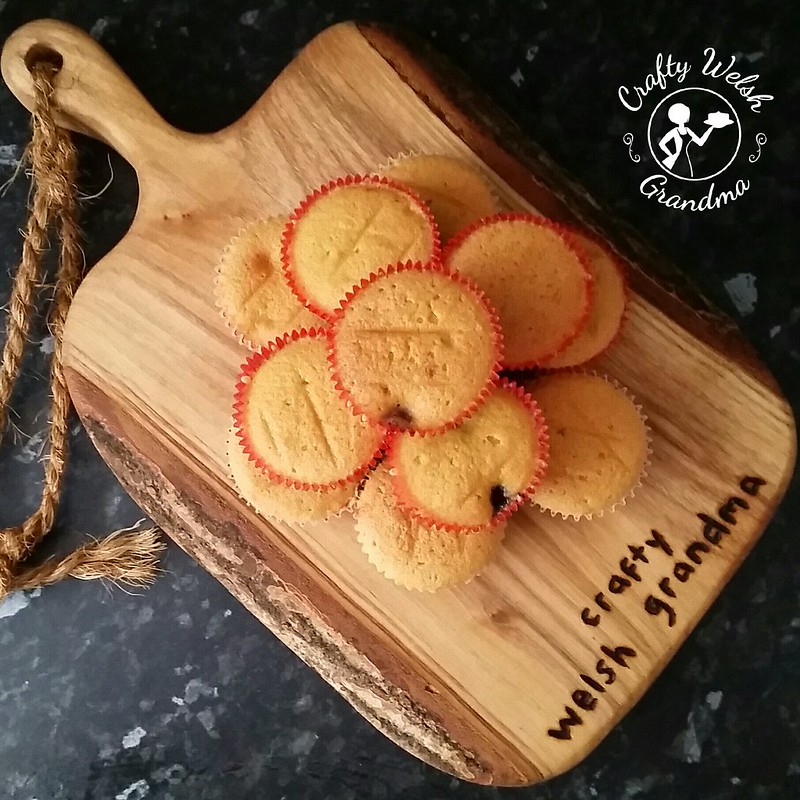 For the buttercream, I wanted to, somehow add blueberries to that too. So, with my usual buttercream mix, double quantity for 24, I split it in half.  Half was to be plain whilst the other half was to be blueberry flavoured with the fruits.

I blitzed about 100g of blueberries to a pulp, then sieved out the bits. Now, I like a few blueberries but didn't realised that they'd be a redish colour when blitzed! This was annoying. I mixed it in the designated half of the buttercream and adjusted with some additional icing sugar to compensate for the wetness that I knew they were going to add.

Disaster! How was I going to explain to my Grandson that mushed blueberries turned the buttercream pink! I cheated! I added a small amount of violet food colour gels and it turned out perfect. A purpley blue - that'll do for me!

Once piped onto the cupcakes I added a fresh blueberry to top it off and, of course, a pirate flag. Believe it or not, I purchased pirate cupcake cases, but failed to realise that the blueberries would stain out the pirate face on the bottom. However, the flag is there, so I'm happy. 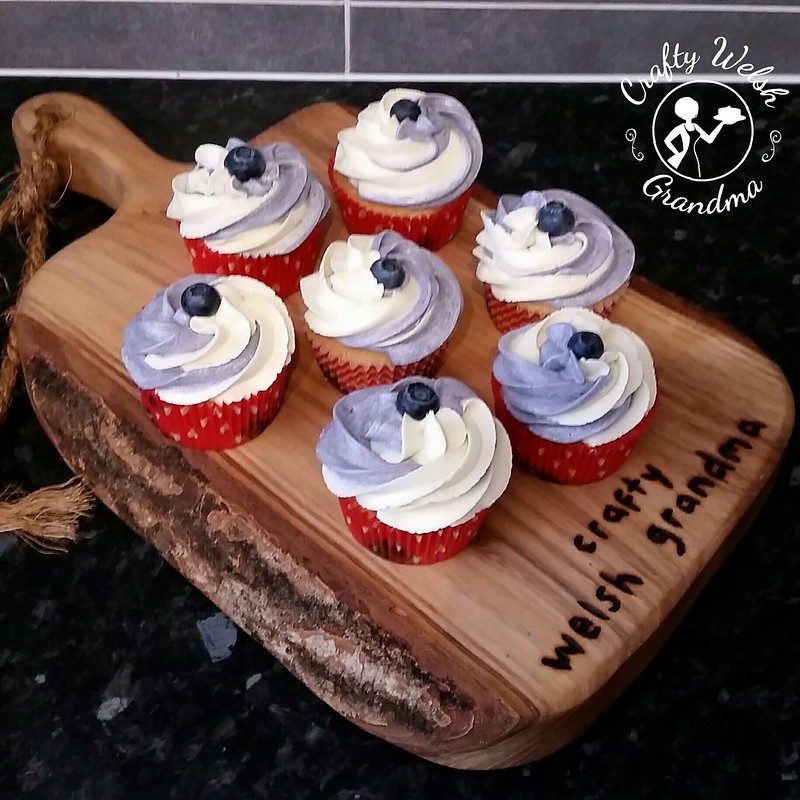 That was the quickest, impromptu bake I've had for a long time. I just hope they taste yummy 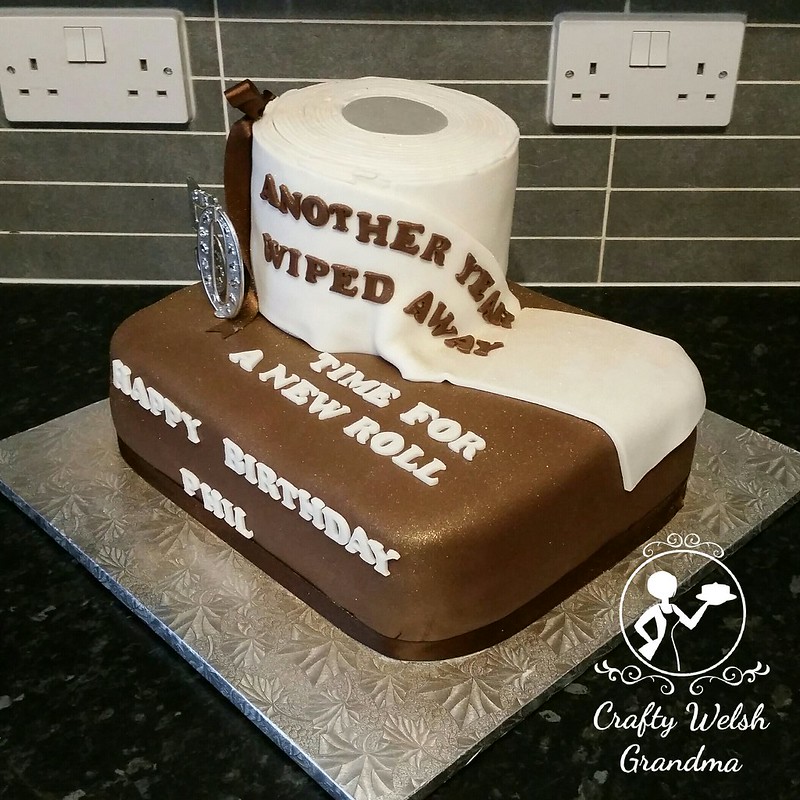 This cake, for my brother-in-law's 50th birthday, had to be a little on the 'quirky' side to reflect his dry, yet, uniquely him kind of sense of humour.

As you may be aware, if you follow my posts, I've had some refrigerator issues since May, which were resolved, finally, this week. Just in time for this cake. 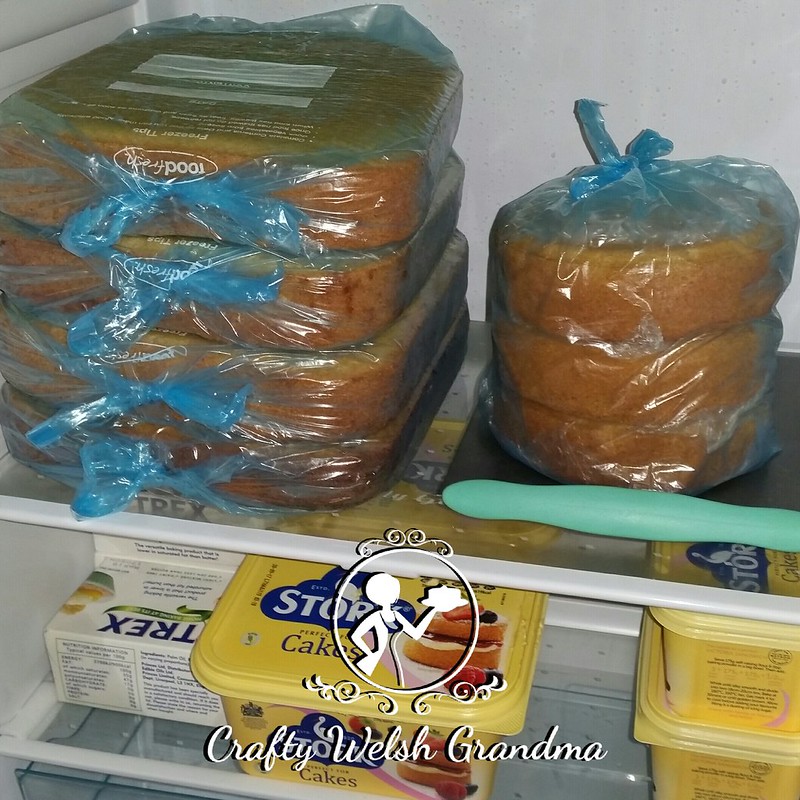 So I'm taking yet another moment to show the "nother new" fridge off  - working!


Having said all that, once these sponges were carved and on the board, they didn't fit on there anyway! Heartbreak! 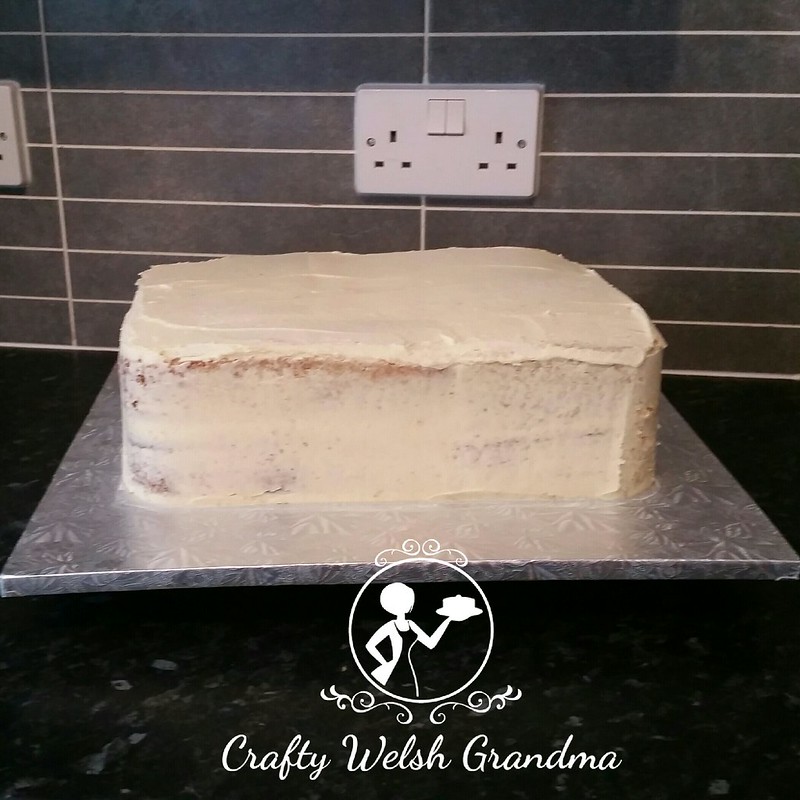 Enter, stage left, my trusty industrial sized cooling fan, which worked a treat and turned my whole kitchen into a refrigerator! 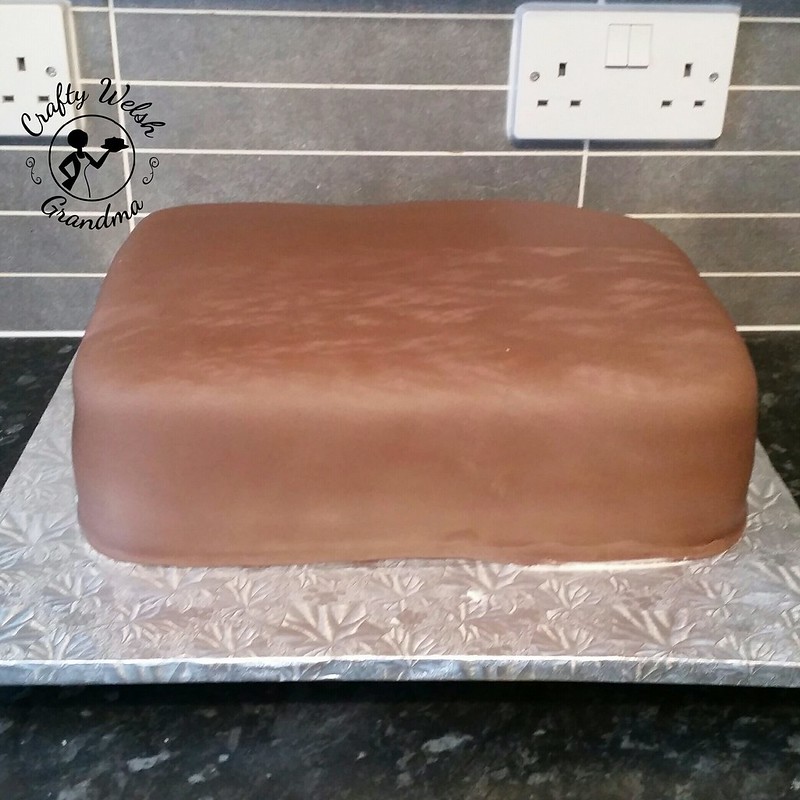 Cake one, or the bottom portion of the whole cake, consisted of mixes of my tried and tested recipe maxed up to a total of 24 eggs. I don't think it's as big as the one I made him last year though.


Covered in a mixture on 1.25kg of chocolate fondant plus 1kg of plain white and an additional 250g of white modelling paste. I used the modelling paste because I find the chocolate fondant very sticky and sometimes hard to work with. Due to the fact that we had another rare hot day (sunshine on top of cake through the net curtain for the photo shoot), it was always going to be difficult. But I did ok. 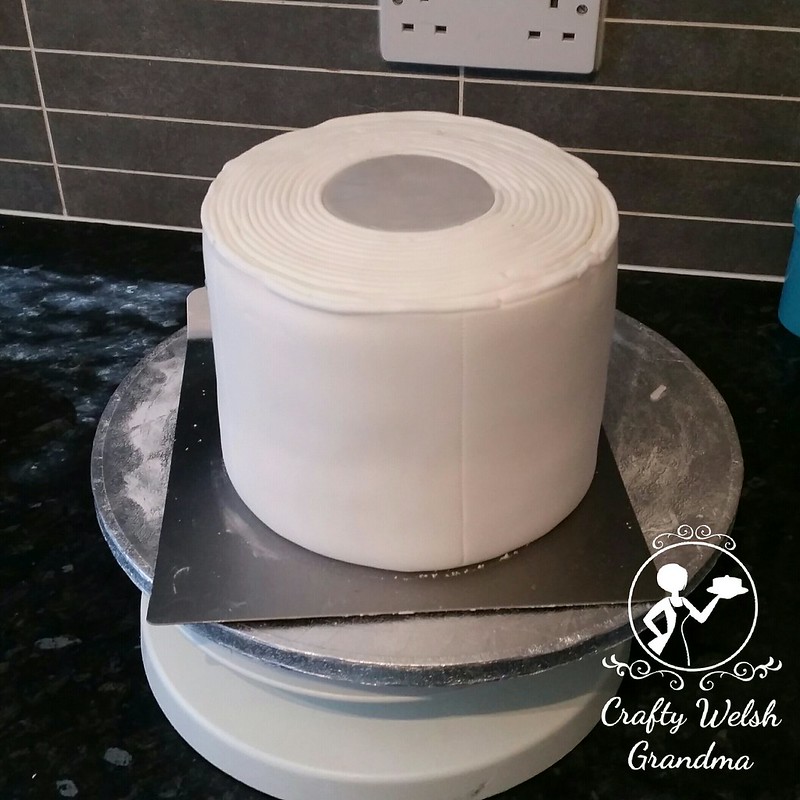 For this, I used 1.5 times the mix of 'old faithful' spread over three 6" tins. It was covered using about 750g of white fondant mixed with 250g of modelling paste and placed on its own cake card. Yes, of course I had left overs, but this will be used another time.

I used an extruder (available on Amazon as well as other outlets) and made long 'strings' to imitate the 'sheets' on the top of the roll and a little grey circle to imitate the cardboard tube void in a proper roll of loo paper.

Once the fondant on both portions of the cake had hardened, I added the 'roll' to the top corner of the base, then rolled out a long sheet the same height as the cake, affixed one side to the 'roll' and draped the rest of the length over the cake. I also used a quilting tool to make the perforations on the 'roll'. 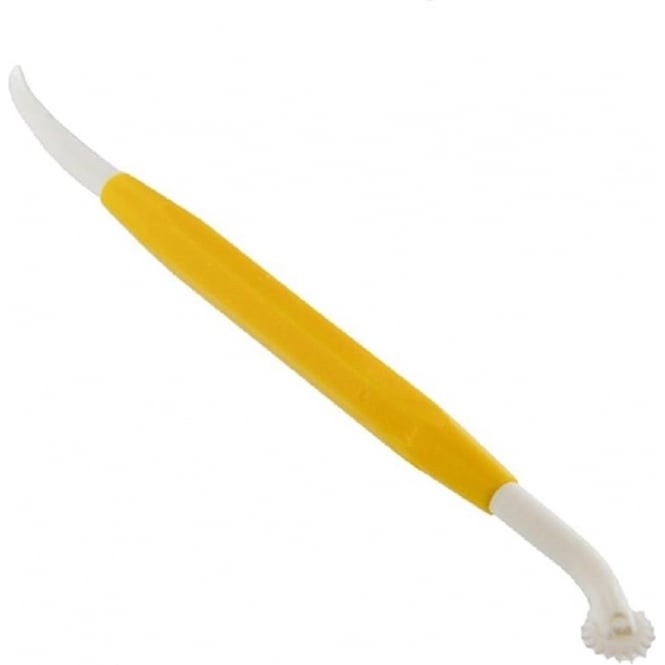 I had a few ideas for the wording on this cake, but chose the following - due to young children being at the garden party.

"Another year wiped away. Time for a new roll." 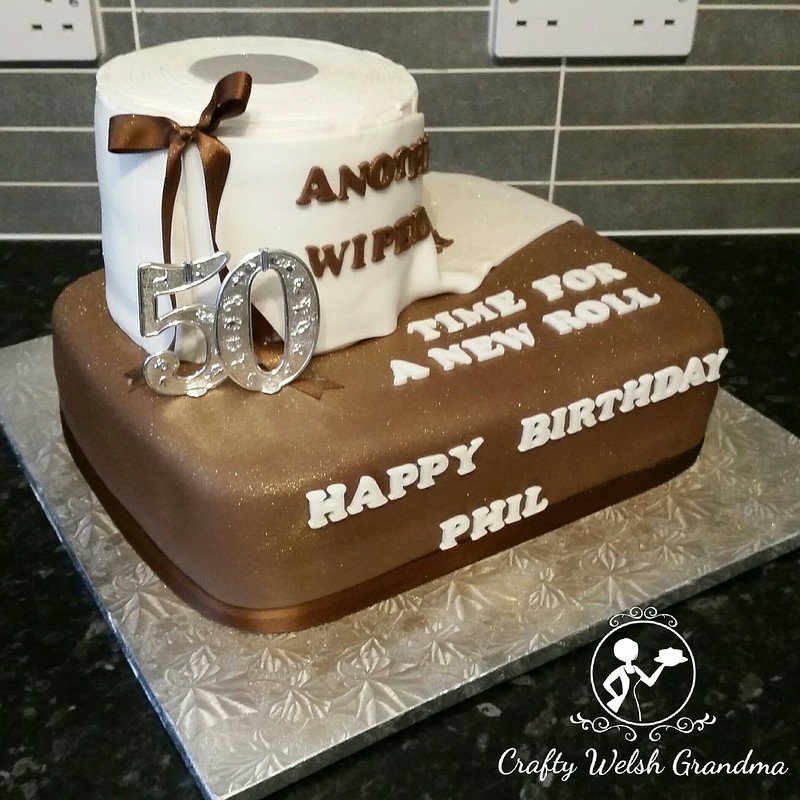 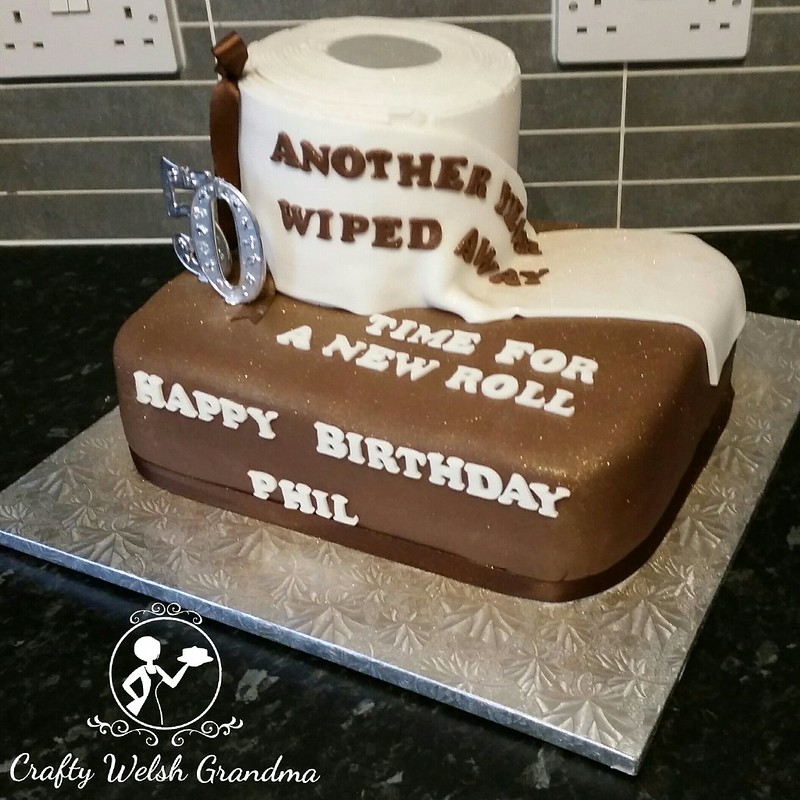 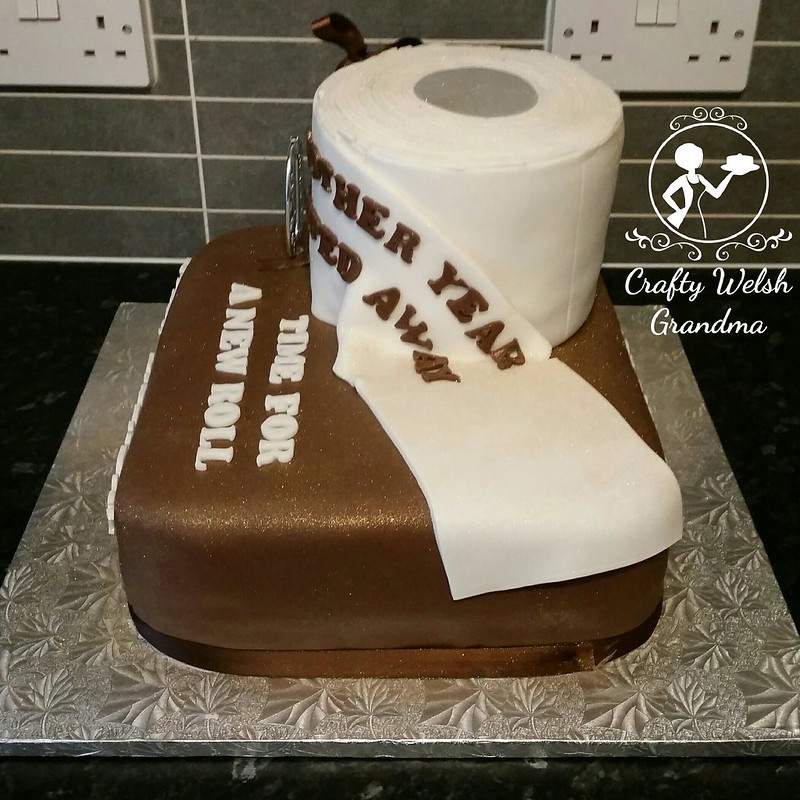 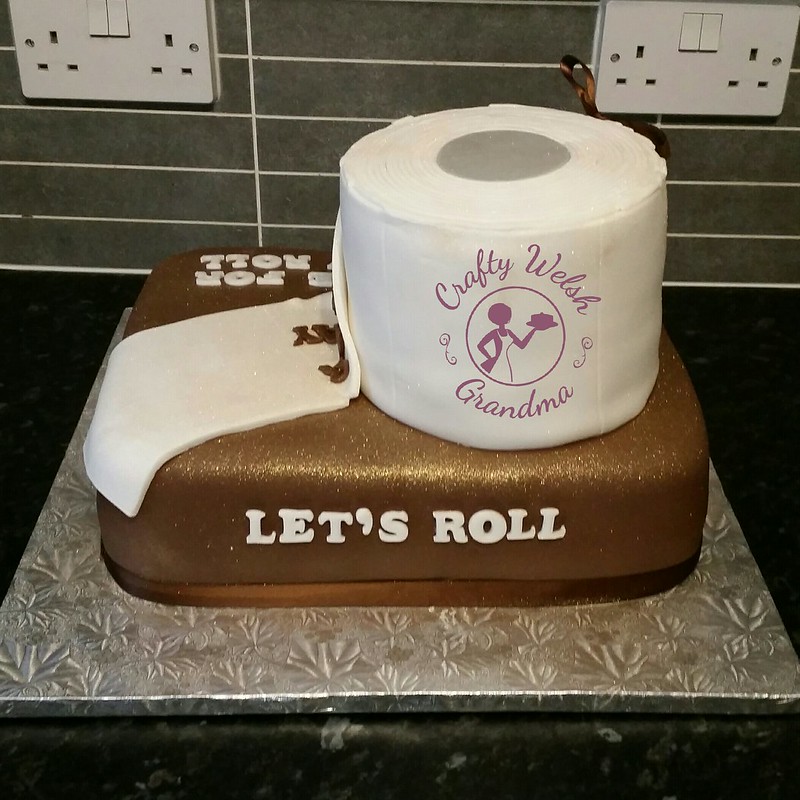 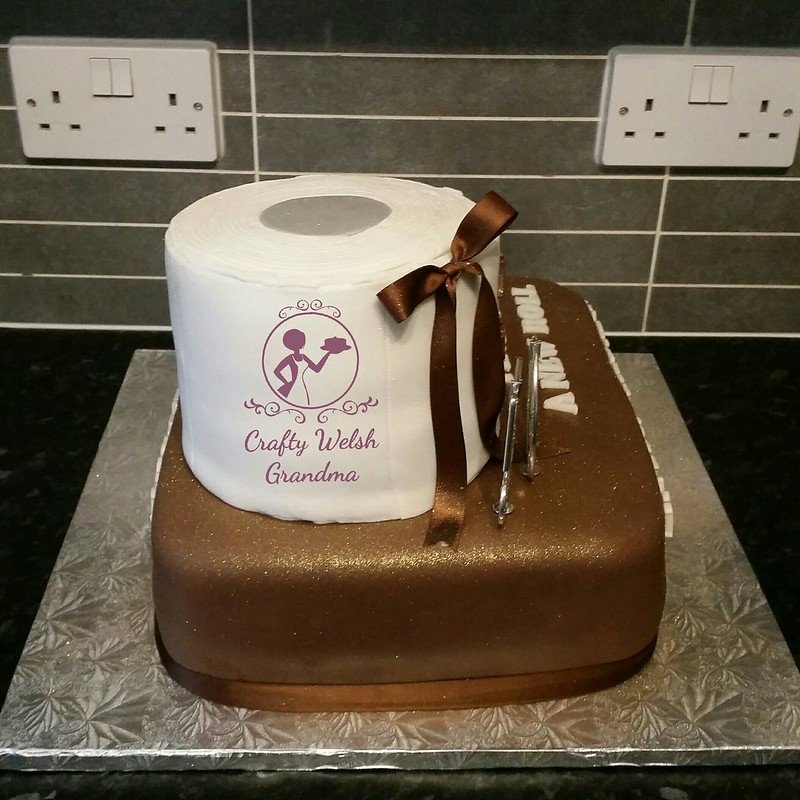 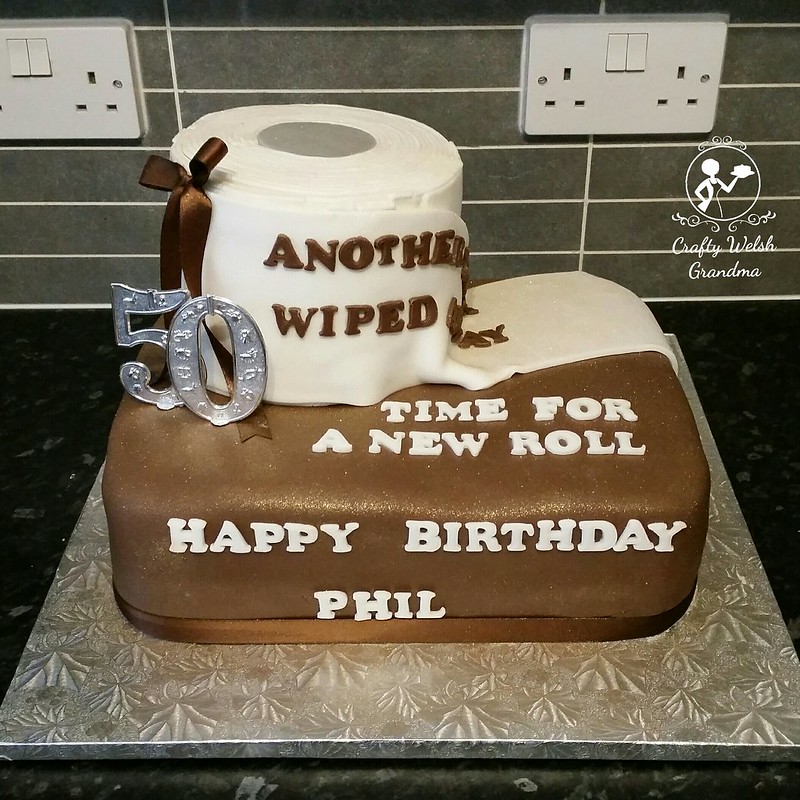 Hopefully, this vanilla sponge will go down well for all those who have some. 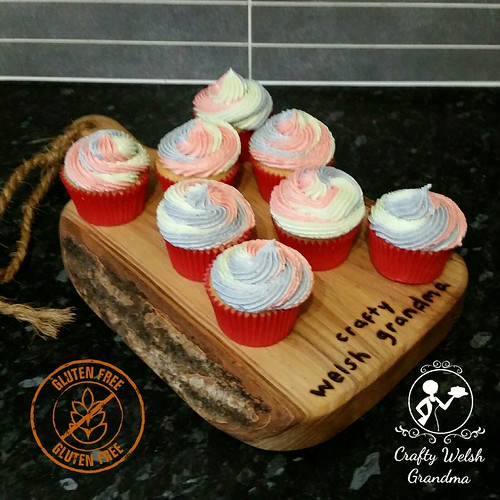 This was to be a first for me! I'd never made anything gluten free / GF before.

I used the same recipe as I always have but changed the flour for GF flour / substitute. 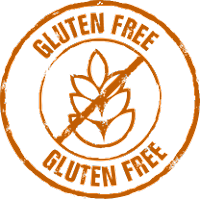 I noticed that the batter mix was slightly more 'grainy' than a batter that used conventional flour, but this did not lessen the quality of the overall flavour.

I think, maybe, I suffered a little 'overkill' when making these. I double washed all my tools and utensils, made 100% sure that these cupcakes did not come into contact with any item or food product that contained gluten. 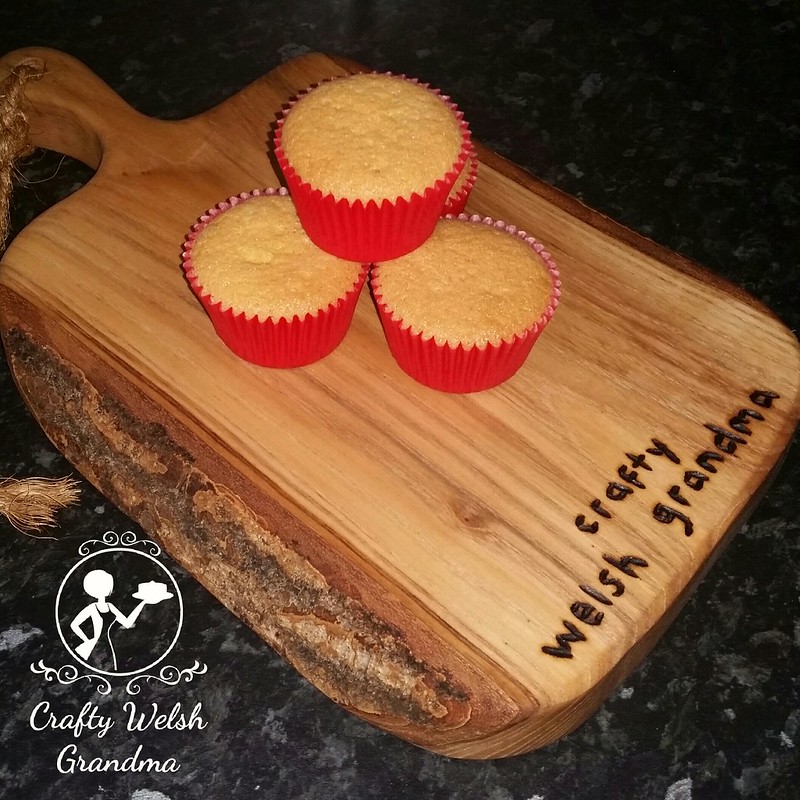 As I jar up all my ingredients, I purchased a new tub of baking powder that was certified GF as well as making sure all my colourings and flavours were also certified GF.

Icing sugar is also GF so the buttercream topping was simply my usual mixture.

I adjusted the mix and only used 75% of the ingredients. With good sized cupcake cases and my faithful old ice cream scoop, the recipe is perfect for 12 wonderful cupcakes. 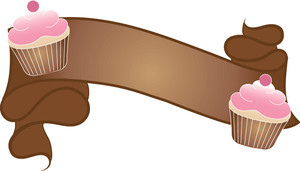 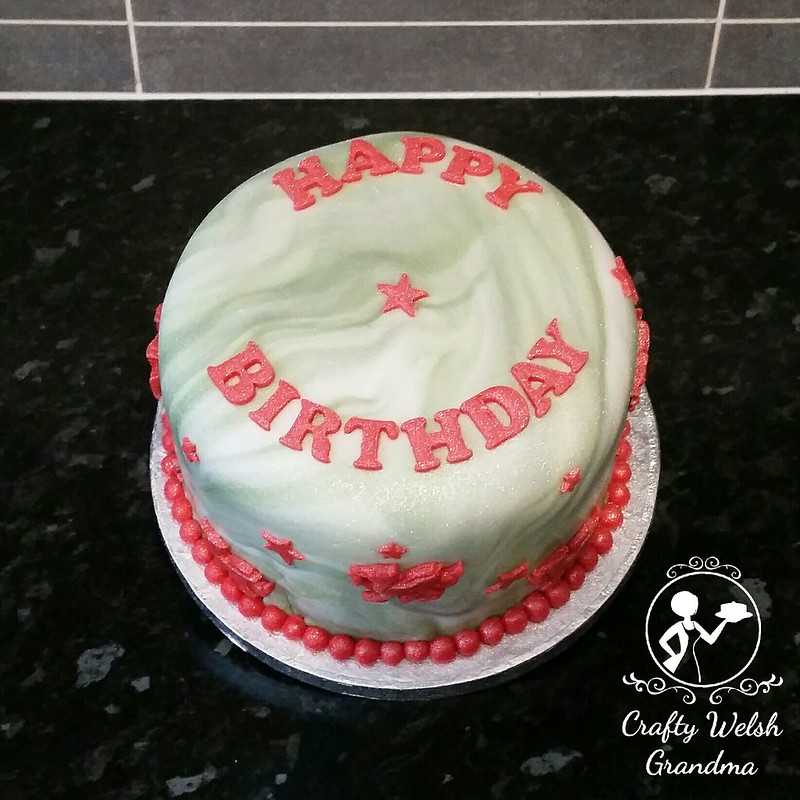 My Uncle Eric's birthday! What to do this year? How on earth was I going to top the amazing chess inspired cake from last year?  I guess I couldn't!

I wanted to make a smaller cake, but equally interesting. Enter here a small but perfectly formed 6" chocolate sponge cake with a plain buttercream for a crumb coat and a little Welsh flair on the decoration! 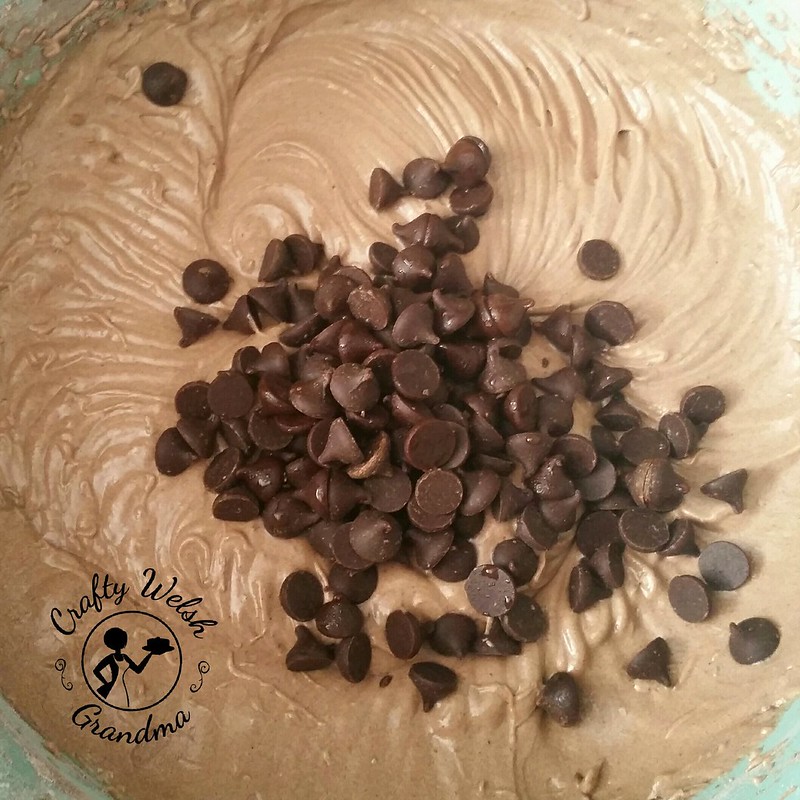 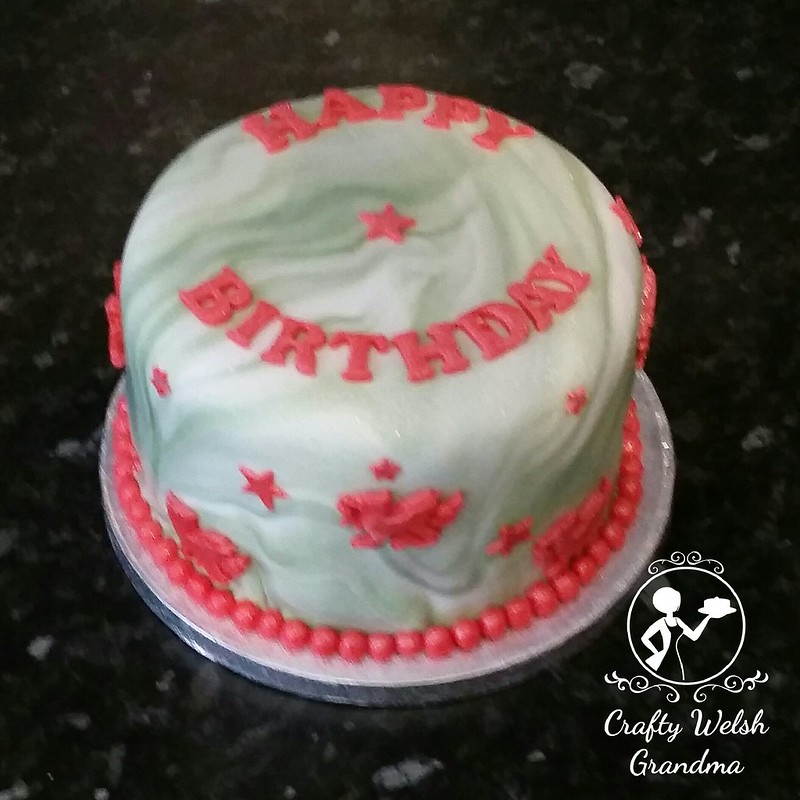 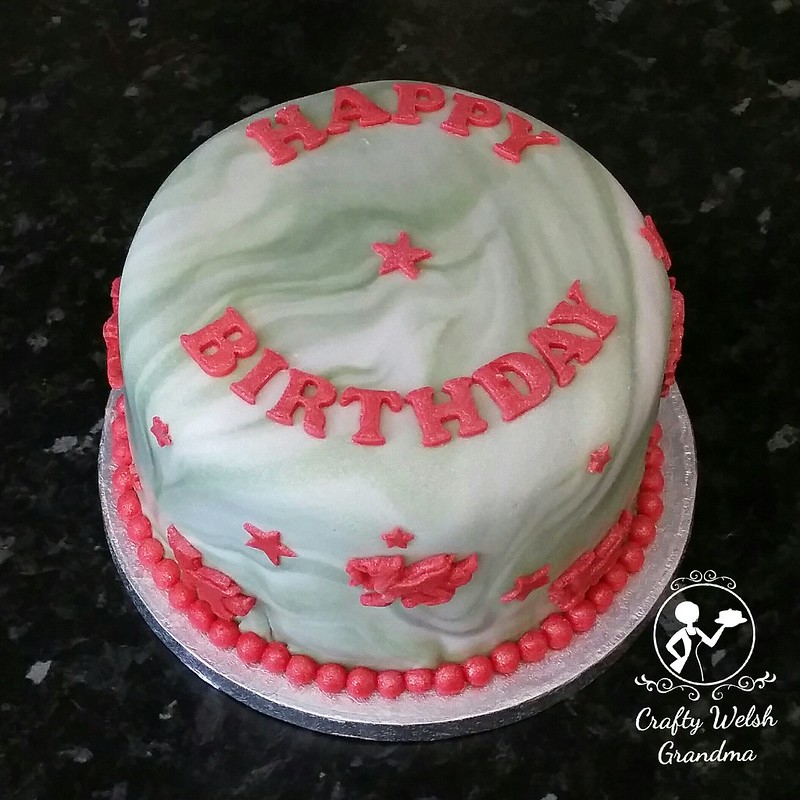