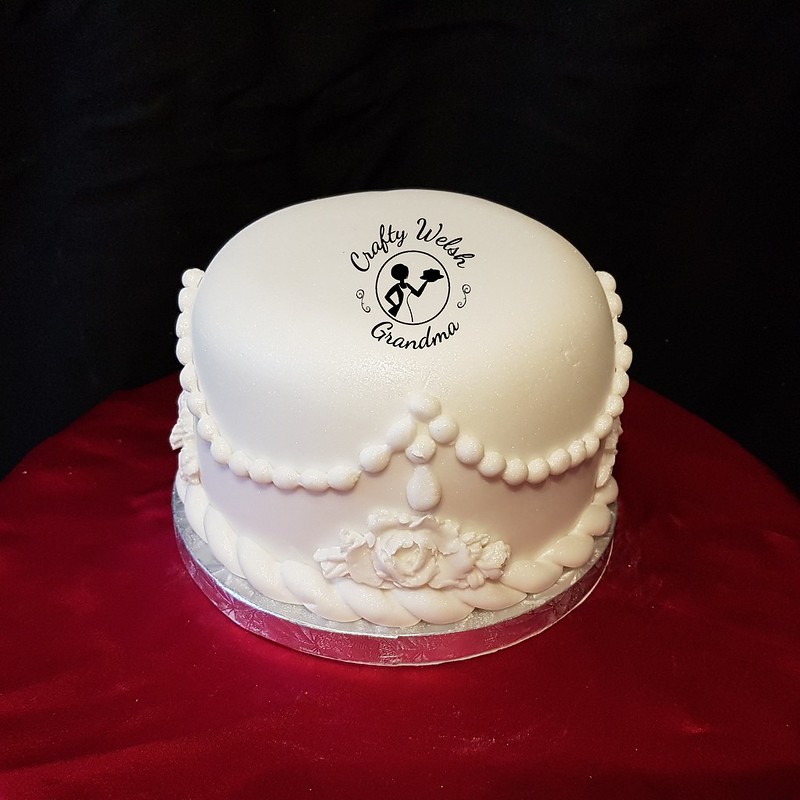 Following the success for the original or #1 cake tasting session (see here) using this recipe for the cupcakes,  you may recall me suggesting that there could be a second tasting session.  These, for this session, were made as two small 4.5" cakes, still using the Red Velvet recipe but, this time, to include the simple syrup.

This session, I hope will be the last session, as I need to get this right! However, I'm going to say that this post should have been called "The Good. the bad and the ugly!"

No, I didn't get it right! Being an amateur, I learn as I'm going, usually from other peoples blogs or YouTube. I have noticed that far too few blog entries by others, don't document the massive fails.

Seen above, using basic buttercream for the crumb coat and the layer on top before the fondant. This was a round cake, about 4.5" and covered in pearl-sprayed fondant. I trialed some decorations for the bride and groom-to-be to see what is available.  On the image you will note that they don't exactly match and have no theme.

I used a simple rope decoration for the join of the cake to the board, or in the final cake, the one tier to the other.

I trialed some white roses, from a latex mould, and affixed four to this 'tier',  I am not sure if these will work, but this is a sample piece.

I've also tried, rather quickly and more of an 'after thought' some pearl garlands with pearl drops at the apex of each of the 'swags'. Once sprayed with pearl lustre, I left it so it did not become overcrowded with decorations.

I was running out of time, the recipient was due in less than an hour and I still had to decorate the second cake. Now here comes the disaster zone ...

The Bad And The Ugly! 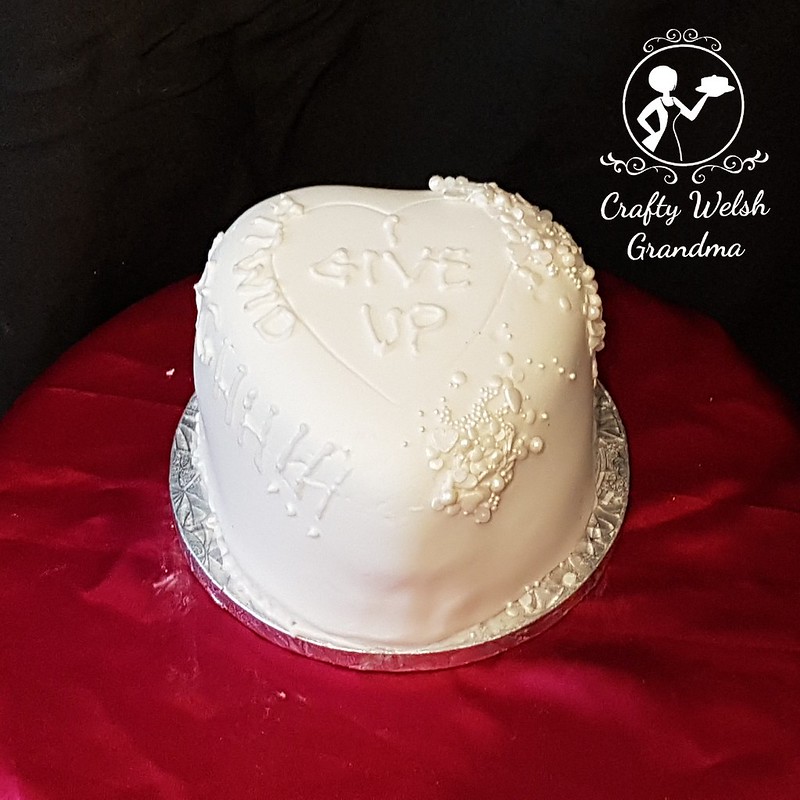 Oh just look at it! I've seen better looking mud pies made by kids in the park!

Here are the issues:

The cream cheese frosting was a hit for flavour! Recipe here. The recipe was too soft, so I added 100g more icing sugar, that helped, but not that much at all.

It was the swiftest fondant cover-up I had ever done.  For the first 15 to 20 mins,  it looked amazing. But as I left it harden and the frosting defrosted and came to room temperature, I watched it bulge and ripple as the frosting slipped down under the fondant. Crisis! 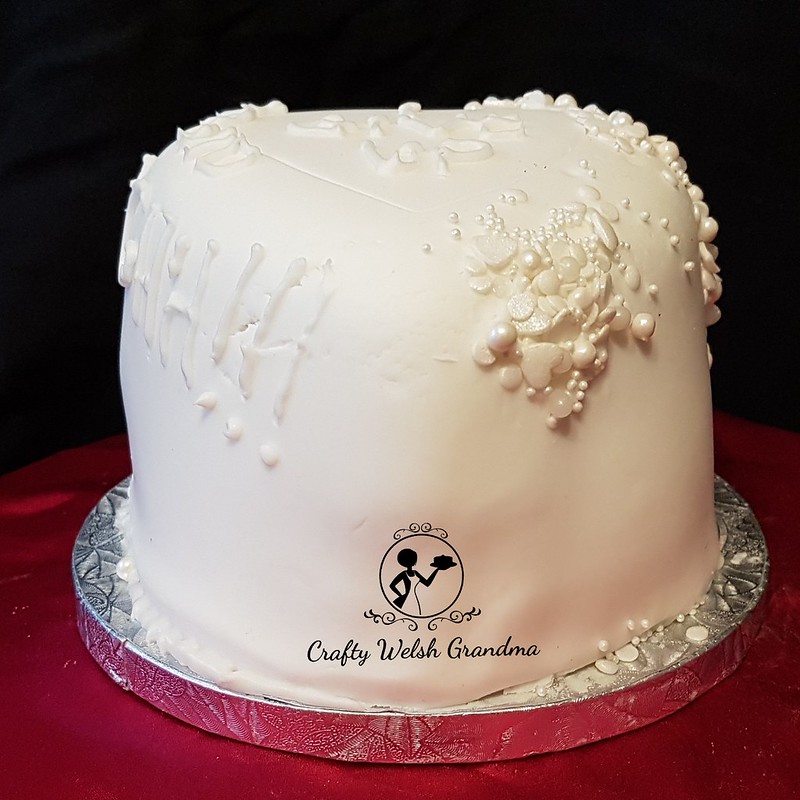 I was ready to bin this monstrosity and quit. But no, I carried on in the mindset that became a comedy in my kitchen. As I watched it slip and deform I thought I'd just break into a little Disney song and dance! Not safe for children though!

OK, so It doesn't rhyme, fit or work, but it did for me at the time.

Still humming that tune, which I shall just leave here for you ...

... I tried some Cornelli Lace - I'm really pushed for time by now and the royal icing was too cold, actually, my kitchen was too cold! It didn't work!

With one last **** it all! I just vandalised the rest of it! I scrapped the ideas for the decorations, after all, they weren't going to stay on that slippy mess! Well, I'm never afraid to fail! I am more afraid of never trying than failing, I mean, how else am I going to learn 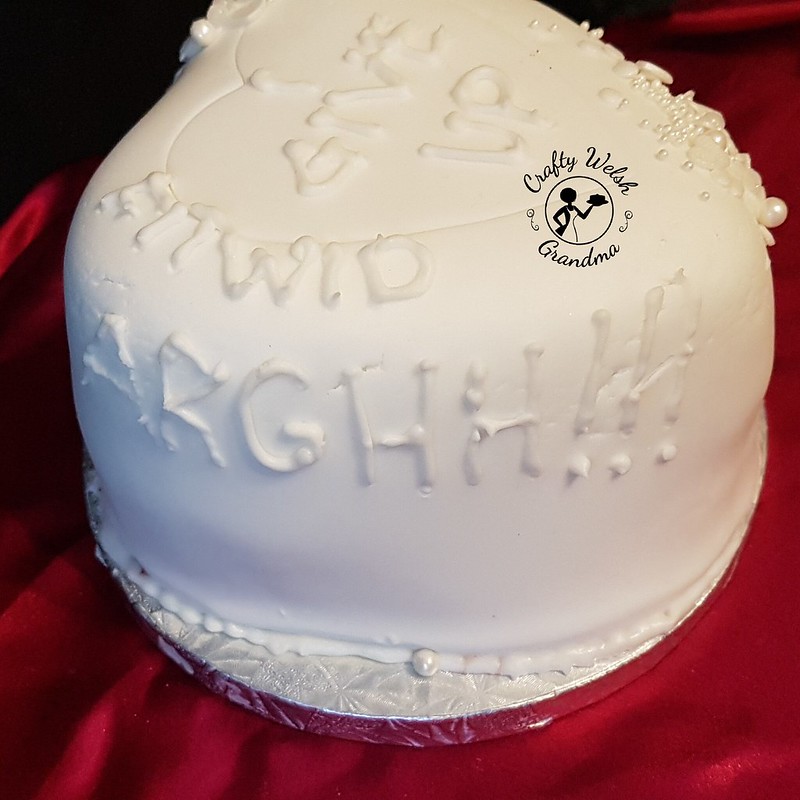 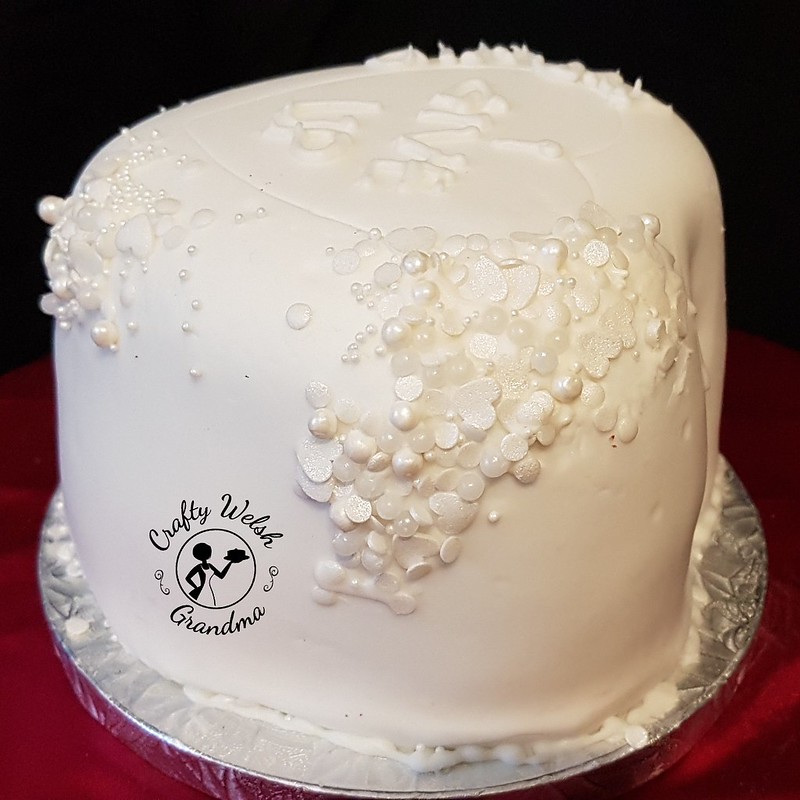 Whilst the cream cheese frosting that I made was an amazing success, taste-wise, stability-wise, it's an amazing fail! I will not be using it for the real cake, the cake will not make the 100s of miles journey it has to go on and remain standing when I deliver it.

Even though the second cake was an amazing fail, it was the one I had the most amazing time with!


When "Plan A" doesn't work, there are still 25 more letters.

Let me tell you what didn't fail ...
Unbeknownst the the bride and groom to be, I froze these sponges! Which made absolutely no difference to the taste. I did this because ...
Posted by Niki Hill at 08:00 2 comments: 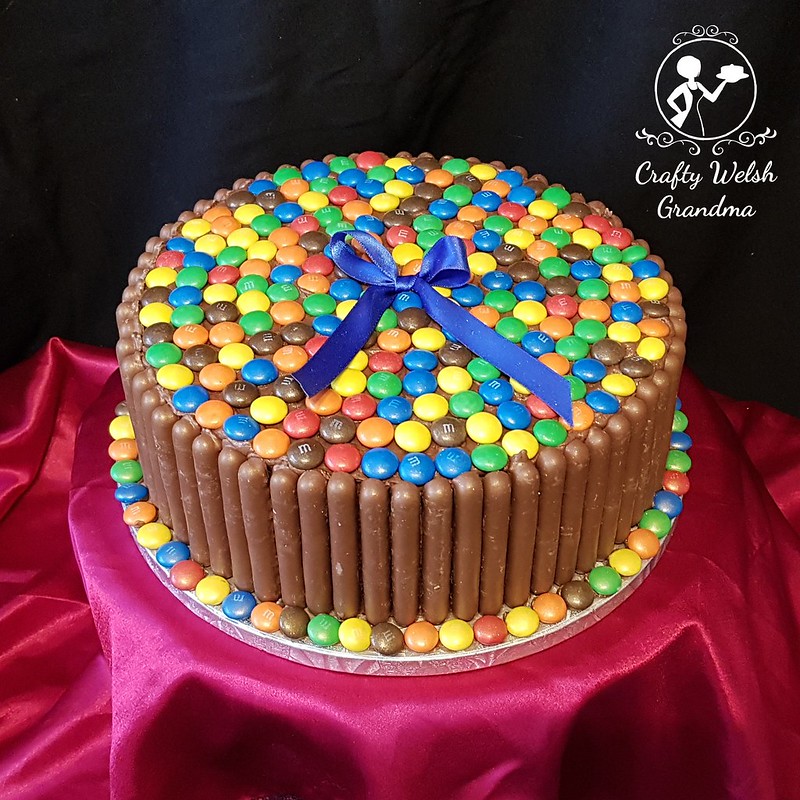 I love doing fondant-free cakes, they can be so much fun!  I'm loving the multi-coloured top and the thought of eating it, but it's not mine and I could never eat that much chocolate.

This one is made with:
Once the sponges were cooled, chilled and levelled, I topped the layer off with chocolate frosting, then layered it with the chocolate caramel buttons, then another layer of chocolate frosting. I used about half a bag of these buttons. 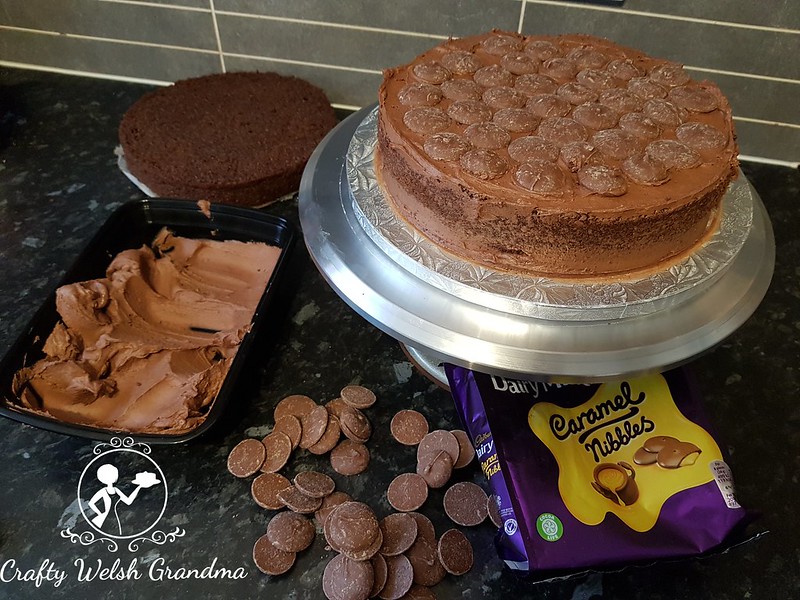 Once the two layers were sandwiched together, the sponge was crumbcoated and chilled.  The top layer of chocolate frosting was not chilled prior to affixing the chocolate fingers.  I needed the frosting to act as a glue. 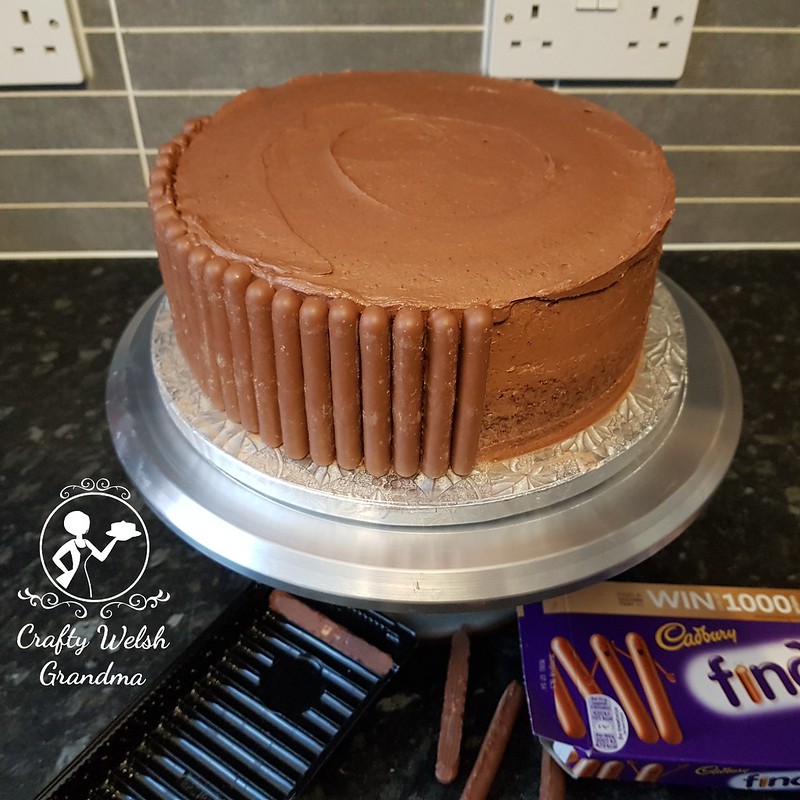 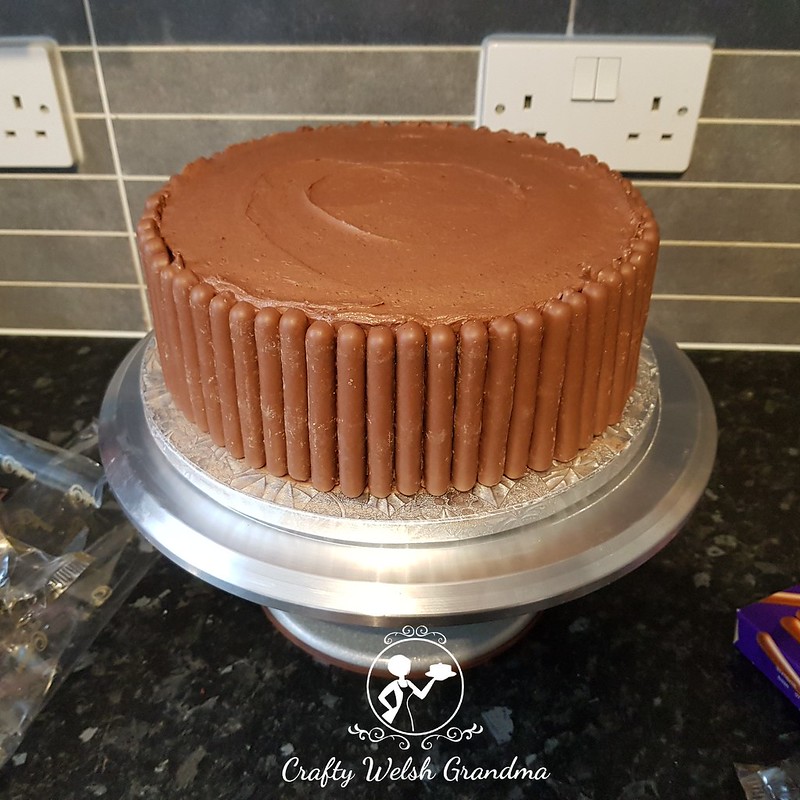 I used about two and a half boxes of chocolate fingers.

Next, let's top this off with some M&Ms. I used about 250g of them and fixed them on the top as random as possible, yet in a circular pattern.

Whilst I started in the middle for the caramel buttons, I started on the outside for the M&Ms.

Is there anything I'd change? Well, yes. I'll use a bigger cake board 😀 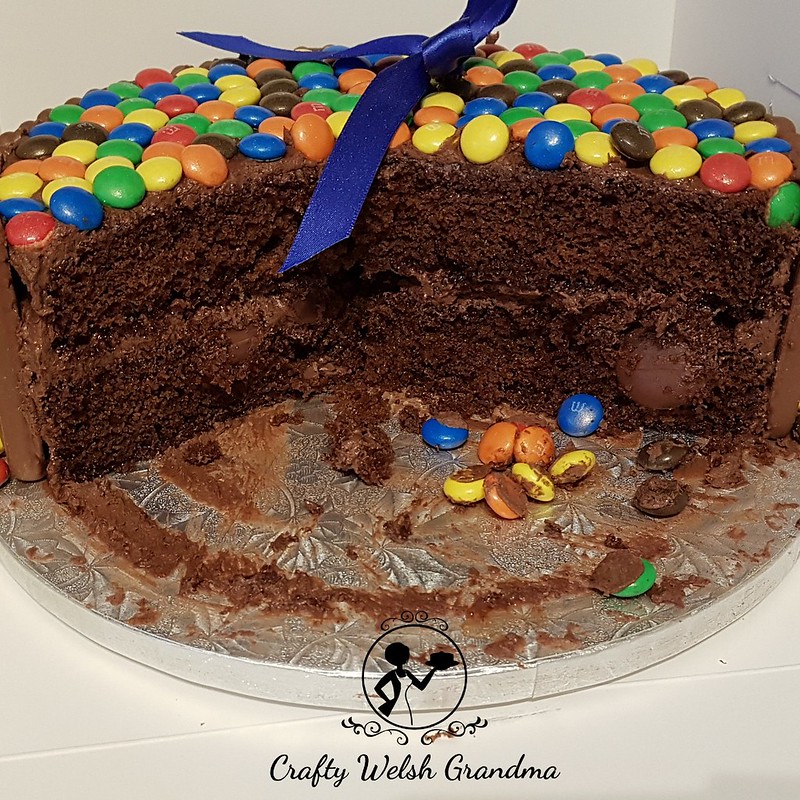 Paul's previous cakes from me have included:

The recipient is a bit of a chocolate nut, much like the last one I made a cake like this for. I can't wait for him to see this!

All that's left for me to say is,

Happy Birthday Paul
Posted by Niki Hill at 13:19 No comments: 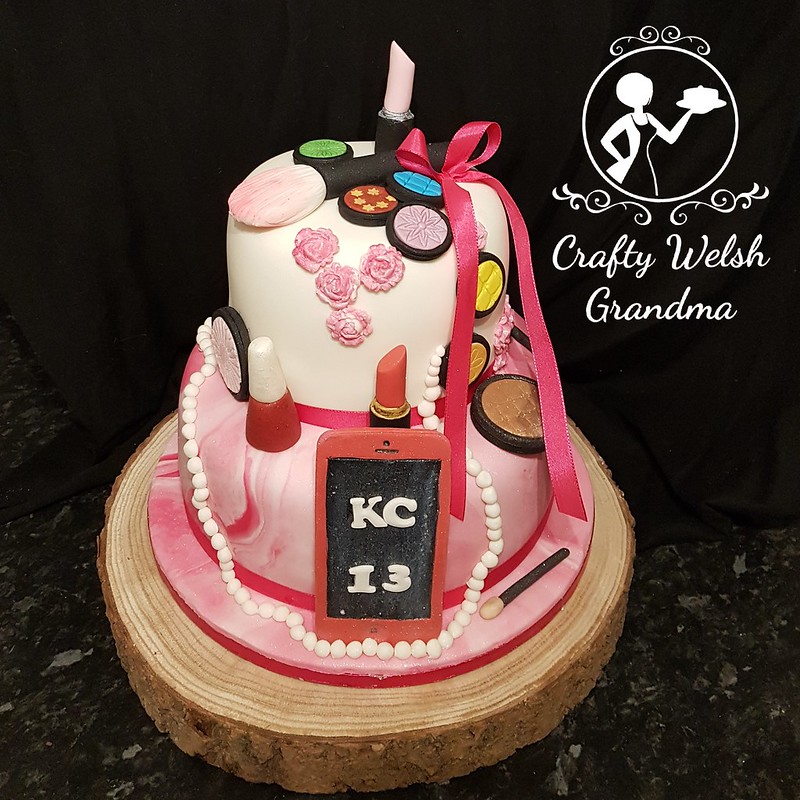 Thirteen is one of those birthdays that is quickly becoming one that requires a bigger celebration than it did when I turned to my teenage years. What are young ladies 'in to' in the 21st century?

For this one, it seemed easy as her mum asked for make-up and such other things, but more especially, a mobile / cell phone! Check out the work in progress for the phone here on my Insta

The cell phone here suffered a little, but it came out ok in the end.  As you can see, it was amended before being attached to the cake.

Initially, the grand topper of this cake was to have been the pair of fondant stilettos I made recently, but, alas, they were simply way too big!

The centre of the two bottom layers of the smaller, top tier, were hollowed out and stuffed with chocolate M&Ms, the top layer, obviously, stayed in one piece to hide the hollow and ensure the cake looked as it should.

The top tier is a very 'grown up' plain ivory whilst the bottom tier is a wonderful marbled effect using ivory, white and fuschia pink. It was a thought I had to be symbolic of being a fun-loving new teenager, but with an element of an emerging 'adult' head.

Due to the fact that I couldn't use the shoes as a topper, I was left with a large expanse of, well, nothingness on some of the cake, so I made pearl beads from fondant, and draped them over the cake. I think I works rather well. I also added a few fuschia pink and while marbled roses on the top where there was a little tear in my fondant and to fill in some blank areas.

Topped off with a fischia pink ribbon and bow plus a sprinkling of magic, edible glitter, this cake is totally perfect for the teenager it is destined for.

Ever wondered what happens when my back is turned? My creations are destroyed and utterly enjoyed! 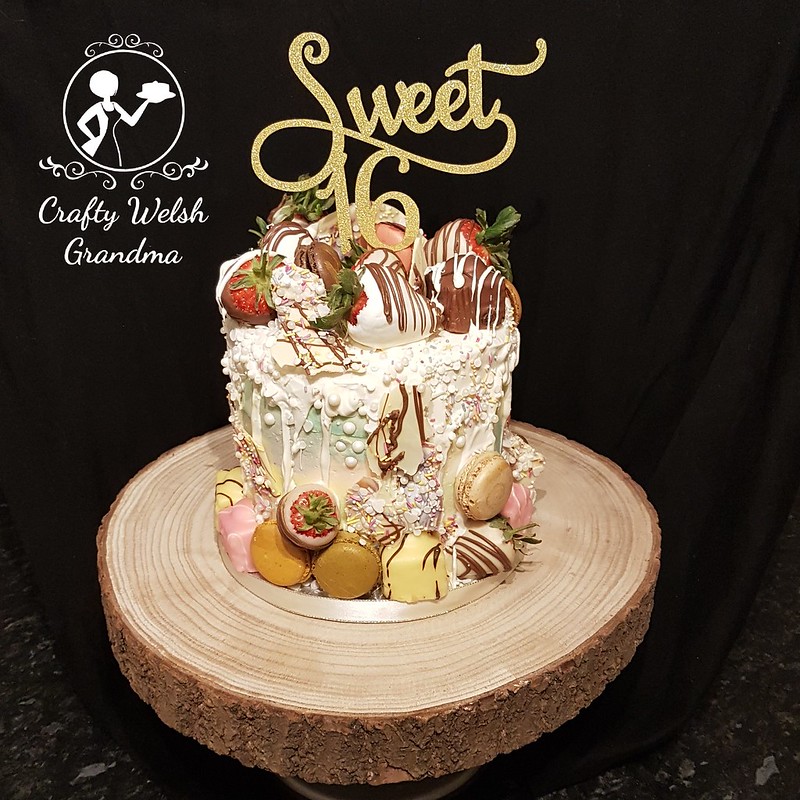 I've never made one of these, but always wanted to.  But never have I ever been able to justify making one for no reason. What better reason than a very special birthday, Sweet 16! Such a stark contrast to the cake this young lady received last year!

Pastel colours were required on this fondant-free cake.  The final coat of butter frosting was without colour, then dotted with various gentle shades and smoothed off to create a graduated effect.

I used PME white vanilla candy melts to create the drips and also to dip some of the strawberries, the other strawberries were dipped in white and milk chocolate, then, once chilled, they were decorated the opposite colour chocolate.

Even though I added oil to the candy melts as suggested to me, I was not sure how much, so did not achieve the desired runs and drips I had hoped for. But I think I still looks awesome!

The sponge has been kept simple to accommodate the variety of decorations.
The 'Sweet 16' topper was purchased from a shop on eBay

This cake was so 'last minute' because it had no protection to keep in fresh, ie fondant.


I have never had so much fun decorating a cake as I did with this!
I loved every moment of the experience.

Thanks to my niece for allowing me this opportunity 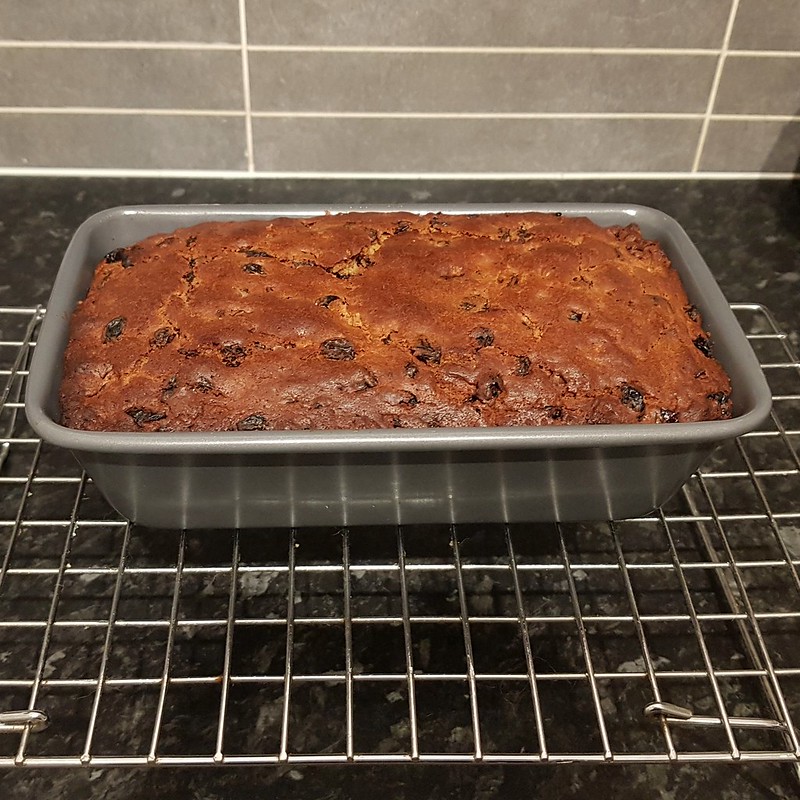 Perhaps a little misleading, after all, the whole cake isn't boiled, just the fruit with part of the ingredient list.

This recipe was left to me by an amazing octogenarian, she used to make this for 'special' occasions and always made me a small festive cake, using this recipe, and would decorate it accordingly.

If you find yourself in a situation where you want a Rich Fruit Cake or even a Bara Brith, but find you are seriously pushed for time, try this as the fruit does not need to be soaked overnight. 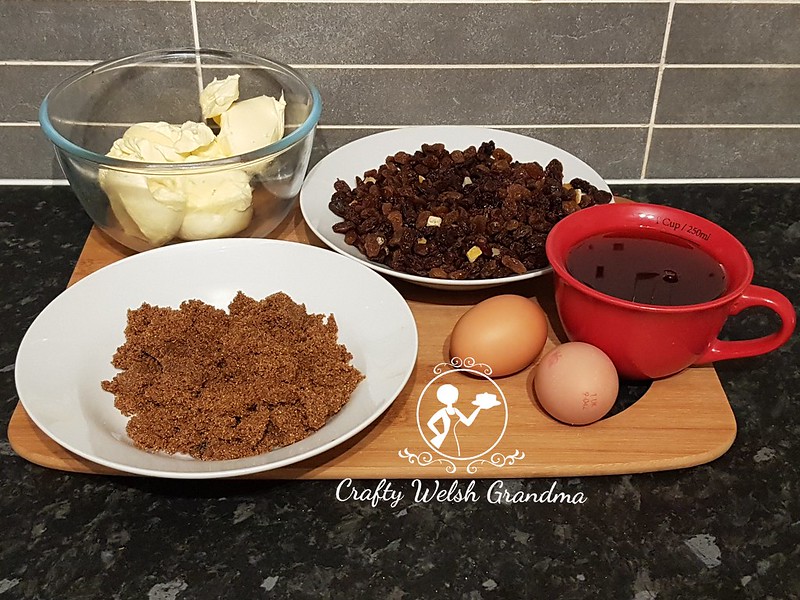 This recipe was found, handwritten, in the back of a decades old recipe book.  I will post it as is with a few minor changes that are italicised

* As you can see from the image above, the type of flour was not specified. I used self raising, only because it was the first bag out of my cupboard, but other right fruit cakes have proved to work just as well with plain flour 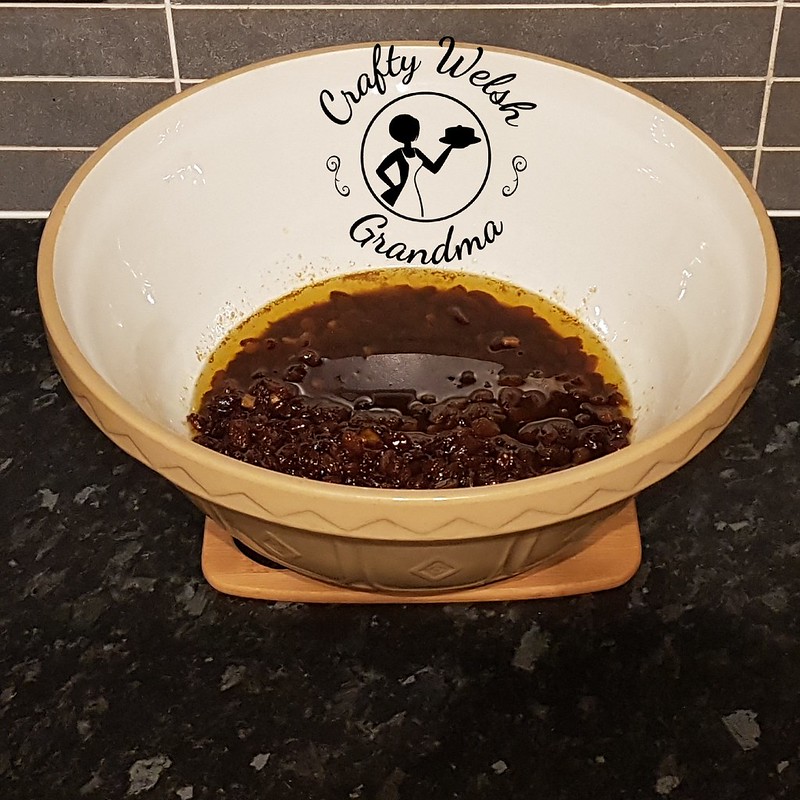 I transferred by mix to a large mixing bowl to cool. 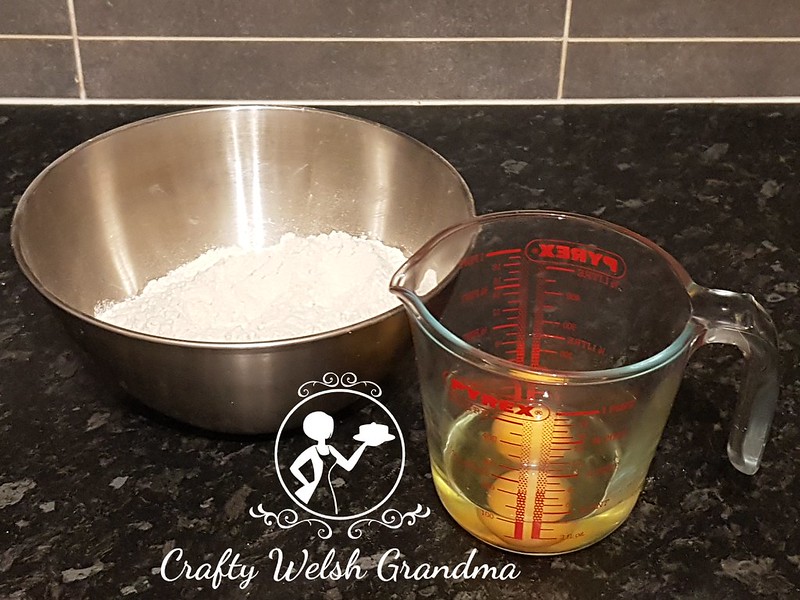 Only when cooled, add flour and eggs and mix.

Bake in the centre of the oven for 90 minutes, but check after 70.  If the skewer / cake tester comes out clean, your cake is cooked.

Turn out onto cooling tray.

Tip: When almost, but not completely cool, wrap in cling film or plastic food bags.  This will help retain a little extra moisture, without the cake going soggy, and soften the hard top, if you have one 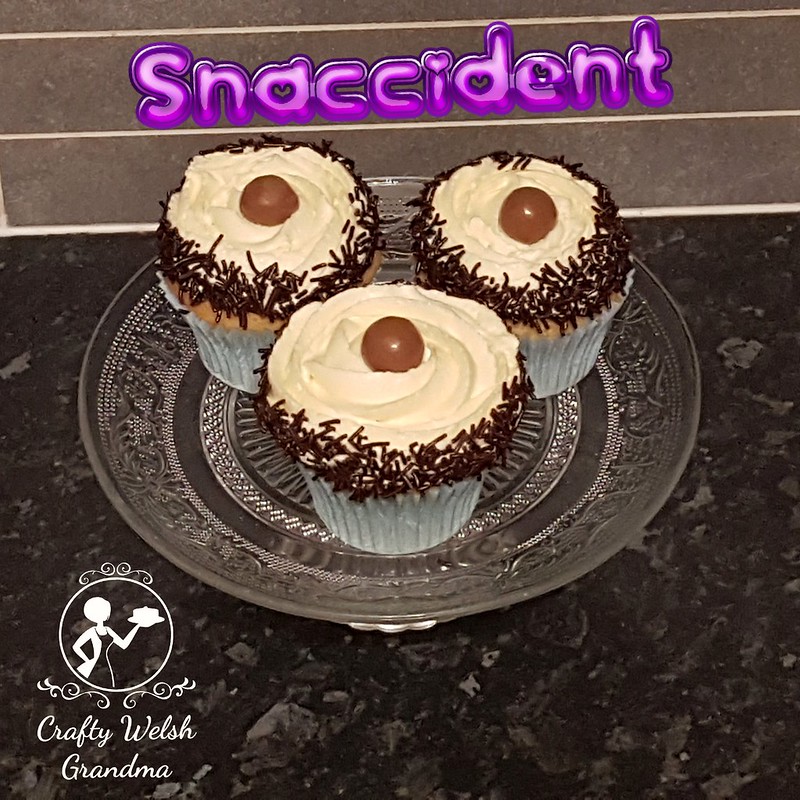 I'm going to share these cupcakes with you, even though I consider them a fail!

A fail because of a number of reasons:

I've never professed to be perfect at baking, but not even I make this many errors in one bake!

It's OK to make mistakes, let's be honest, who's going to leave these go to waste? So, maybe not that much of a fail after all