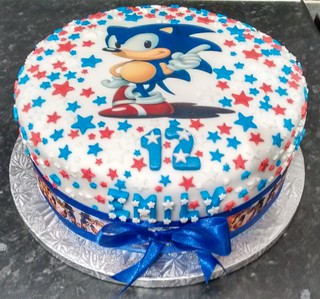 This is the second Sonic cake in have had the pleasure of making. Yep, I think I'm warming to this blue chappie lol. Here's my first one

Again, you find me contradicting myself when it comes to my rule of "only family and friends" ... But my sister asked me, so that's kinda family.

A scrumptious 10" X 4 layers of chocolate sponge, sandwiched together with rich chocolate butter cream. (Recipe here). Apparently, young Emily loves chocolate so I did my best (",)

There was a bit of an issue in the kitchen, it was way too warm and the icing started slipping on the crumb coat, but I saved it!

I made countless red, white and blue stars from modelling fondant and even coloured the blue myself, I'm getting good this.  My sister had to help me glue them on, my eyes were going and I'd been on my feet for almost 14 hours making it. I guess I'm slow, but I did have the usual chores to do, oh, and the odd cup of coffee here and there. 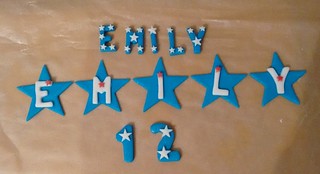 In addition to the miriad of stars, I also made Emily's name in two different styles because I wasn't sure which one would look the best. I used the numbers and the top style of name as the one that would adorn the cake. 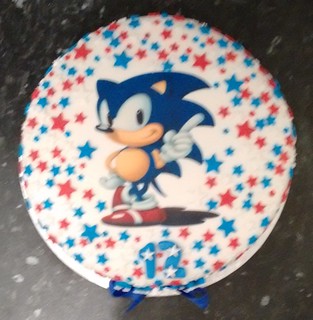 Just in case you were wondering about the pattern of the stars, there isn't meant to be one, except "random". As for any gaps you may see, most have a white star in them which doesn't show up well on the photograph.

All that's left to say about this Sonic is ...

And thanks sis for helping ... I couldn't see for stars. I'm still seeing stars and probably will long after this cake has been enjoyed