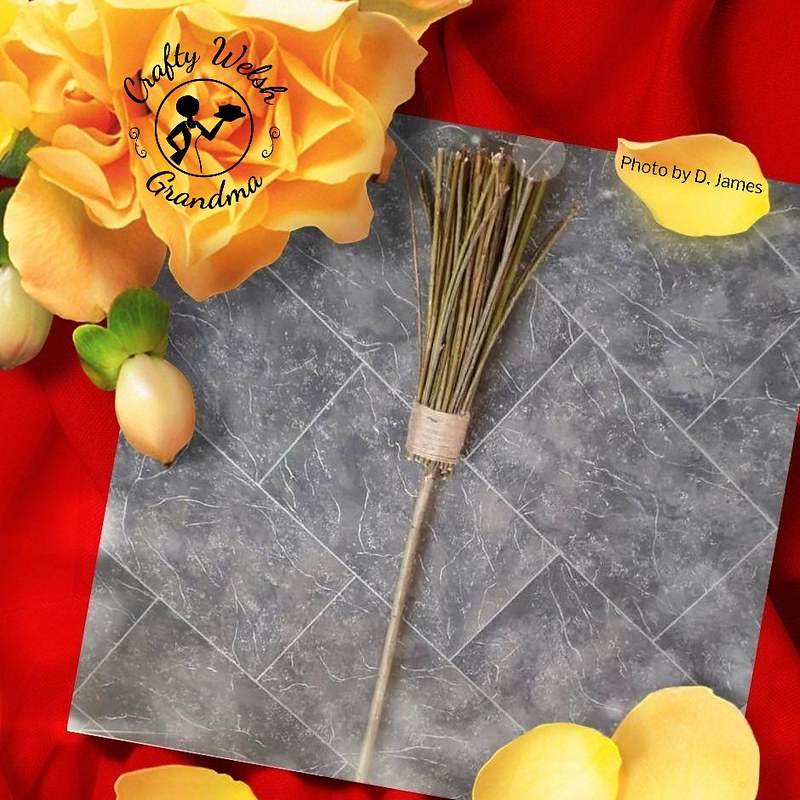 A traditional, handcrafted besom / broom was used during the handfasting ceremony at the wedding of my eldest son.

Jumping the broom is a time-honored wedding tradition where the bride and groom jump over a broom / besom. The act symbolises new beginnings and sweeping away the past and can also signify the joining of the two families whilst offering a respectful nod to family ancestors.

It is my belief that a new broom / besom should be used for each ceremony as to ensure that nothing negative is brought to the ceremony from a one used before.

The broom would usually be hung over the doorway as a reminder of the ceremony.

There is some debate as to when the couple should participate in this, some say straight after the handfasting, some say before the first dance ... but as long as it's done, then all is good. Some also suggest that all the guests should jump over the broom too, but I'm unsure is I agree with this.

A besom is constructed using a good, stout pole and twigs. These twigs are fastened around the central pole to give it the round look, instead of being flat.

This particular besom was crafted specifically for the handfasting ceremony from White Willow.  The willow tree is known by many folk names, including Tree of Enchantment, White Willow, WItches Asprin, Pussy Willow, Withe or Withy and many others.

The Willow tree, Salix alba, has long been associated with Wicca and WItchcraft figures in folklore and mythology of many cultures.

The botanical name, Salix, comes from the Celtic word sal, meaning near and lis meaning water.

As the Alder Tree is known as "The King of the Waters" the Willow is known as its "Queen" and is closely associated with the Moon. All types of artisans sat among these trees to gain eloquence and inspiration.

The branch and twigs were collected by my daughter and I when walking along the river on a peaceful evening. When I brought them home, I allowed them to rest overnight, then trimmed all I needed.

Due to a tendon issue, my daughter completed the construction for me.

The completed besom was gifted to the Groom's family to the Bride's mother and family following the handcrafting ceremony.